Libretto by Henri Meilhac and LudovicHalévy

The viceroy of Peru has his corrupt ministers bring him lovers from the female population. This time his head of government has noticed the destitute street singer Périchole who, promised the prospect of eating her fill at long last, leaves the man she loves, Piquillo. But to qualify as a proper mistress she must be married. To this end, the court lackeys drag in none other than Piquillo, who has been persuaded to play along by alcohol and the requisite cash. But can money along bring happiness? In La Périchole, a masterpiece by Jacques Offenbach and, at long last, an operetta, again feature on the programme of the former operetta venue Theater an der Wien. Nikolaus Habjan, who has long been an audience favourite as a director and puppeteer and is also a sharp observer of political developments, breathes new life into this opéra-bouffe with opera singers who act, actors who sing and puppets that dance.

In German with German & English surtitles

Introduction to the work 30 minutes before the performance

Act I The Spanish colony of Peru is ruled by the viceroy Don Andrès di Ribeira. However, the real power in the country rests with Count Panatellas, first gentleman of the bedchamber, and Don Pedro de Hinoyosa, mayor of Lima.

Marketplace in Lima in the second half of the 18th century. The town is celebrating the Viceroy’s name day. The Viceroy loves roaming the streets incognito in search of pretty girls. This, of course, is known to everyone in the town. Don Pedro, for his part, runs an extensive network of spies who ensure that everyone is happy with the government, while Count Panatellas and Don Pedro liberally help themselves to the resources of the state and citizenry. However, when free alcohol is available, no one really seems to mind. Those who suffer from this situation include Périchole and Piquillo, a couple who try to earn a living as street singers. They are too poor to buy any food since they do not earn anything with their singing. The Viceroy has taken a liking to Périchole and wants to make her his mistress. However, the constitution states that any lady the widower wishes to install at court as a lady-in-waiting must be married. Consequently, a husband and a notary must be found to marry her – and on a public holiday, with no reading of banns. Count Panatellas and Don Pedro are instructed to find both within two hours. Should they fail, it shall please His Highness to accept their immediate resignations. With no entitlement to a pension. Thanks to large amounts of alcohol, all three parties – Périchole as the bride, Piquillo as a randomly chosen groom, and the notaries – are persuaded to sign the marriage contract despite all their misgivings.

Act II Next morning at the Viceroy’s palace. Before Don Andrès can enjoy what his new favourite has to offer there is one formality to be completed. The husband must present his wife, now bearer of the titles of Countess of Tabago and Marquise of Mançanares, at court and officially introduce her to the Viceroy. The Marquis de Tarapote faints when he learns that the new favourite is a street singer. The ladies of the court, his daughter Manuelita among them, are indignant that they have not been chosen and punish Piquillo, who is still half drunk and slowly trying to piece together what happened the night before, with scorn and contempt. Court Panatellas and Don Pedro lead him away from the envious courtiers to rehearse the presentation ceremony with him. – At the ceremony, the scandal erupts. Piquillo recognises Périchole and throws her down at the Viceroy’s feet. Don Andrès has him thrown in prison.

Act III, scene 1 Piquillo is imprisoned in the dungeon for recalcitrant husbands which happens to be empty. An old prisoner from another part of the dungeon has been digging an escape tunnel for twelve years with a pen knife and has made it as far as the cell that now holds Piquillo. Périchole appears to rescue Piquillo. But instead of escaping, they argue. When Périchole tries to bribe the gaoler with her stolen jewels the latter turns out to be Don Andrès in disguise: incognito. He has the wrongdoers chained to the wall and sweeps out. Not without whispering to Périchole that, if she changes her mind, all she has to do is sing. The old prisoner reappears and frees Périchole and Piquillo with his pen knife. Périchole sings, the Viceroy enters, is overpowered and put in chains. The prisoners run off.

Scene 2 The same plaza in Lima as in Act I. Don Pedro and Count Panatellas are looking for the fugitives. With their soldiers they comb the whole town. The search proves fruitless and Don Andrès takes it out on his subjects. Périchole and Piquillo appear, behaving as if nothing had happened, and sing the song of the mercifulness of Augustus in which they tell their own story. The Viceroy is so moved that he forgives them all. All except the old prisoner, who has forgotten what he was locked up for. 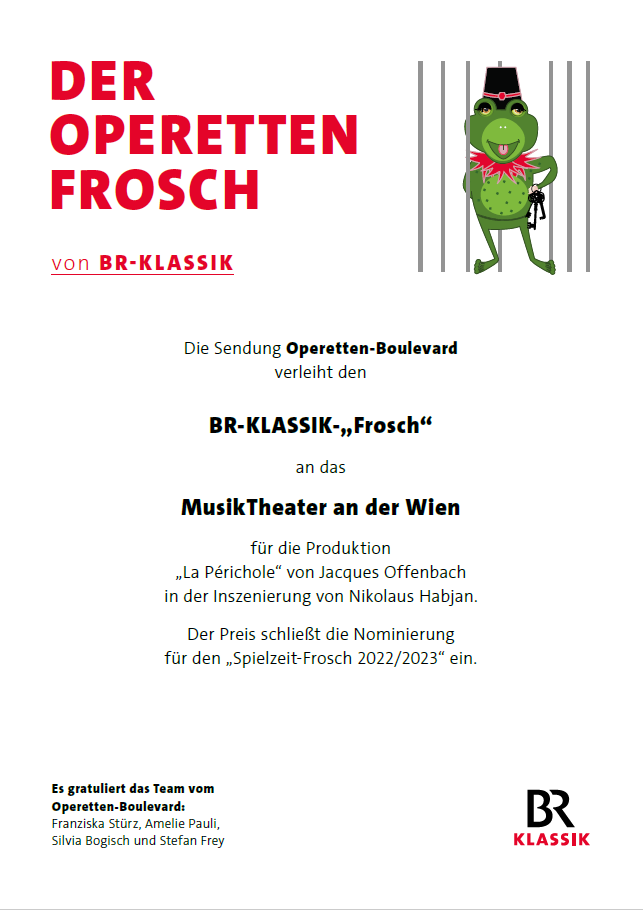